Oh that voodoo that you do… Sometimes there’s just no substitute for hands-on experience. 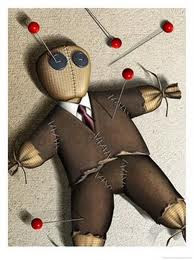 I underwent surgery on my foot a few weeks ago.  It was to correct damage to bone, nerve and tissue that resulted from on and off infections in an initially small wound that occurred two-and-a-half years ago. It was a minor puncture, but a subsequent trip to Jamaica resulted in an infection from tropical marine bacteria. At least this is what I was told by four independent, reputable doctors on different occasions. It was very nasty stuff, very hard to cure, they said. It had morphed and reared its ugly head numerous times, defying even the most potent antibiotics.  The damage was repaired and now   everything was plodding along fine, pun intended, until the beginning of week two. That’s when the curse took hold.

Seems a nasty infection ferreted its way in through the open door of the surgical incision, or it may have been the one from below the Tropic of Cancer, lying in wait in my bones like an asp in the grass. This came to light as the doctor merrily pulled the numerous stiches. “Oh my, this isn’t good,” he said.  Those words are not good coming from a doctor who has visited and removed some of your inner parts. At least now there was an explanation for the steady increase in pain and obscene swelling.

After judicious injections of a numbing agent (which was certainly, and unfortunately, not single-malt scotch) he proceeded to reopen the incision and swept the gremlins out. I’m not afraid of needles. Really, I’m not. The good doctor hosed everything down with the stinging-nettle, clinical smelling variety of disinfectant and wrapped the foot tightly.  Well, not quite gift wrapped, but you get the picture.  Doc exhaled slowly.  “Along with powerful antibiotics you’re going to need x-rays and blood work,” he said. “We need to make sure that none of that infection is in your system and is going to end up in your heart or brain.” How could I argue?  Visions of more copays danced in my head along with our Christmas shopping list.

“Go wherever you want to for the x-rays; they can draw the blood here,” he continued.

“Okay. That will save me a trip,” I replied.  He exited and I could hear him instruct staff members outside the ajar door. “See Mr. Gahan in room one. We need to draw blood. Complete blood-count,” he said to an invisible tactician.

“What kind of insurance does he have?” she asked.  Doc shuffled the papers in the folder and told her. She seemed pleased.

Waiting for the bloodletting only added to my discouragement about the way things had gone. I could do without more complications. The most recent complications paled when the Voodoo King entered.  Skinny as a broom handle, his skin was a tapestry of tattoos. He spoke with a strong Caribbean accent. He had weird eyes.

“My name is Reggie. I’m an intern. This is my second day,” he said with a great deal of pride.

“Second day?” I squirmed on the vinyl padding.

“I hope so. I mean, if you say so.” I gulped as I watched him snap on the gloves.

“Roll up your sleeve.”

“No matter. No problem.”

I chose the right, only because it was the closest to him. I rolled up my sleeve and reclined. Don’t be a sissy, you’re not afraid of needles, I told myself. They wouldn’t let him in here if he didn’t know what he was doing. I should have relied on my visceral instincts.

He wrapped a rubber tube around my arm and probed my skin with his finger for a while. “Make a fist and clench it,” King said. I did and matched the action with my sphincter, which was grappling for a good grip on the green vinyl.  I also closed my eyes.

Then he said, “A little pinch.”  Needle-man was right. It was only a pinch and things seemed to be going okay. “Oh no,” he said.

“Oh no?” That was the second set of unfortunate words that I had heard from a medical professional in the past hour.  “Oh no, what?” I questioned.
“I missed.”  The weird eyes looked disappointed. Without missing a beat he lifted his tray of assorted blood draining tools, needles and vials and placed it on the floor to my left.  That’s correct… on the floor. “We’ll try the other side,” he said.

I kept my composure as I cleared my throat to protest.  The door to room one opened again and his superior stepped in. She was young, but assessed the situation and took charge.

“Don’t put this on the floor, “she said and put the tray on an adjacent chair.  “I’ll take over here.”

King appeared dejected but had a slight wry grin. He seemed to be enjoying the events.

“I’m sorry,” she said. “This will only take another moment.” She wrapped the tubing around my left arm and said, “Clench your fist and hold it.” Little did she know everything about me had been firmly clenched for the last ten minutes. “Okay, a little pinch.”

“Never mind.”  I should have known better than to be winding up someone who was inserting a sharp object in my vein.  King Voodoo now stood with his graffitied arms defiantly folded across his chest. He grinned.  I think he had a gold front tooth.

“Oh no,” she said. Before I could say “that’s what he said”, those freaky tikki-torch eyes shot lightning bolts around the room. “Oh no, what? I said as I ducked his laser beams.

“I missed,” she said.
“…You, too?”
“Yes, I’m sorry,” she said. “Mr. Gahan, have you ever had blood drawn from your hand?”
“No, and I never will,” I said as I simultaneously unclenched everything and undid the rubber tourniquet.  I could have sworn a strange luminosity washed over her face.  Without movement of her own, or a breeze, her hair swayed. Moon glow filled her eyes.  I was certain about that.

I’m also sure, at that very moment, somewhere in the world (likely on a tropical island), there was a group gathered around a fire chanting, moaning and swaying without the benefit of a breeze… I’m positive they were sticking pins in a tall male doll with a receding hairline and a heavily bandaged left foot.

I did go for the tests my doctor ordered at the lab that I've always gone to.  As I rolled up a sleeve I began to explain to the attending blood-tech what had happened. She rolled her eyes. “I don’t think I want to know,” she said. The cheerful technician was swift and merciful.  I told her she was a rock star. She laughed.  “Sometimes there’s just no substitute for hands-on experience,” she said.  I was in and out in five minutes. There was only one new hole in my arm. The test results came back normal; thank you for asking.
What about the x-rays, you say? That’s a story for another time.